Chapter One: The Shed, The Tapes, The First Release

August 28, 2017
Concerning the past and present as illuminated by the shed, the music found on the Lost Tapes, the thieves who reminded me there was a shed and whose work there made me think about what might be in all those boxes....

In the Summer I went to my home town to clear a broken-windowed, doorless, rusting corrugated iron shed of everything three generations of my family had once considered worth keeping. Books, letters, military service medals from two world wars. Shoes, teapots, vases, tea sets, china figurines. Balls, bats, hammers, saws and rotary dial telephones. Tobacco pipes: Churchwarden, Billiard, Clay, Meerschaum, Briar. Ashtrays, tobacco tins, cigarette lighters and bakelite cabinet radios. Indian clubs, wax phonograph cylinders; fading tallboys, chests of drawers and chairs. And so on. But the big surprise was, in a couple of disintegrating cardboard boxes and an ancient leather suitcase I got in some op-shop in Sydney, on various reels of 1/4 inch magnetic tape, I found pretty much every recording I'd made in my first few years of writing and performing. Not a lot of recordings, about one session a year, usually single takes straight to tape, recorded for radio broadcast in Canberra or Sydney, and resulting in six to ten songs preserved each year. That went on for about five years until 1978 when I made my first formal 'record', a four track vinyl EP. Through 1978, '79, '80 I was recorded pretty regularly for radio shows on 2JJ, 2JJJ and in various demo studios in Sydney....and most of those tapes were also forgotten or believed lost but turned up in the shed too.

So how big, unexpected, momentous was this, given I'm now devoting a journal to describing the journey these discoveries have started and to reflecting on these unearthed songs and performances? Well, as it turns out, very big. Firstly because although I'd completely forgotten writing or recording many of these songs they still feel solid and I'm finding, sometimes to my surprise, that I want to share them. Secondly because some were just gone, no lyric, no nothing, but I had wondered where they went, remembered the idea and remembered that other people liked them. I'm grateful to have those songs back. And thirdly because when I finally heard the tapes I realised how many different voices and, in a way, different versions of me, I have inhabited and sometimes discarded. That third discovery is already changing how I perform and write now.

I can see there are many possible stories to this Book of Lost Songs. Personal, historical, musical stories. Stories about reading, writing, talking, travelling; about invention, reinvention, wondering; about cities and towns and the roads, train-lines and rivers that connect them; the cars, the beaches, the cigarettes, the mountains, the sky. And so on.

Where to begin? Well, I could start with the thieves who mined the shed, sold furniture and traded collectibles for walking around money and were eventually noticed unwrapping old news paper for more antique golfing trophies to sell. Or, maybe with the histories of the disappeared guitars referred to in the title of this journal?  But on reflection, I'm going to add those to the list of stories that can be better told on future, less rainy, days. In this first chapter I want to start with the earliest tape recording, which will released, in a few days, as the collection, SEVEN SONGS: Recorded Live for Radio ANU, October 1973.

This is what SEVEN SONGS looked like when I found it, an unlabelled 5 inch reel in a crumpled brown paper bag.... 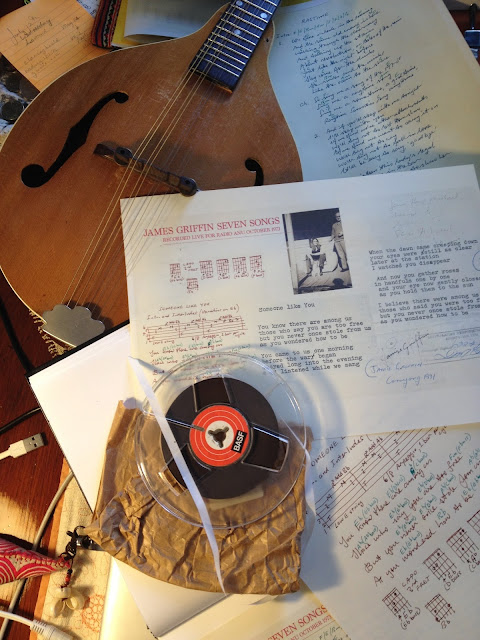 I almost did not hear this recording. When I began transferring tapes to WAV audio files the first box was a random mix of edits, off-cuts, blank tapes and a few song recordings on mouldy cassettes, some of which played, some of which didn't, so by the time I got to the reel in the paper bag, at the bottom, under some books and punk fanzines, I was getting bored and ready to go home. But I threaded the tape through the heads, hit 'play' and on came this North American voice talking about Radio ANU and questioning me about songs. Who was this and what was the accent? Confident voice, especially compared to shy, diffident me, still conquering a childhood stutter. Not many Americans at the Australian National university in 1973. Not a strong accent...Canadian maybe...?
I had no memory of any of this....and then the James on the tape launched into a song called, apparently, Audience, a meditation on the melancholy of someone studying to be expert in the creative lives of Shakespeare, T.S.Eliot, Tolstoy, Picasso, while longing for a creative life of their own. I can see why I wrote that. At the time I was a final year English Literature student studying for final exams....

So the tape rolls on, I'm still struggling to recall the songs and the sound, at one point wondering if one tune is actually being sung by someone else, a friend named Robert, thinking, "My goodness, that couldn't possibly be me....could it?" ....and a picture is beginning to form of the man holding the microphone. Someone a little older than me, twenty-five maybe (I was twenty), flared trousers (unsurprisingly) one of those horizontally striped fitted jumpers (possibly purple and white) that were popular then, a Sonny Bono haircut and a moustache. He's got a portable reel to reel tape recorder and a hand held microphone. I can hear chairs creaking as we talk but I can't quite recall a room....maybe one of those old weatherboard portable barracks buildings that were early hostel accommodation for public servants cogging and wheeling for the Canberra based federal government....and which by the '70s had ended up being ante-rooms, theatre spaces etcetera for the University.

This continues for 35 minutes and 5 seconds. I relax a bit, eventually say a couple of halfway coherent things about writing, sing nine original songs composed between 1970 (my last year in high school) and October 1973....and leave James in 2017 astonished, of course by this window into forgotten worlds, but in particular on that first hearing, by the inclusion of one particular song I really did believe was gone forever.

It was my first 'hit', a political satire called The Ballad of the Two Johns, written in 1970 and performed all through that summer between high school and university, at the Nariel Creek Folk Festival, on truck-bed stages at beach resort talent quests on the Saphire Coast, around campfires, later in the Post Graduate Lounge at ANU, at house concerts all over Canberra and Sydney, in the back bars of country pubs. A talking blues in the manner of Woody and Arlo Guthrie, it recounted an apocryphal journey through Canberra with the conservative Liberal/Country Party Federal Government of the time. People were amused and it got me a little recognition as a promising artist....then the government changed, the song lost its currency, as topical songs will, and I wrote and sang other songs, stopped performing the Two Johns, eventually forgot the words, never had it published in the poetry journals I had other work in, then, somehow lost all written copies.....and now there it was, the second last song in this half hour 'concert'. I could not believe it.

In a coming chapter of this journal I'll describe the elicit hitchhiking journey I took, while pretending to be with family friends on the Saphire Coast, during the summer of 1969-70, when I was sixteen, which led me to write the song in the first place. For now though, I'll leave the Lost Songs story here.

And so....an un-imagined tape of nine songs plus interview, recorded for Radio ANU (later 2XX in Canberra) in it's earliest days.... as part of what must have been one of the first community/public radio ventures in Australia, now turns out to be a new album of previously unreleased music. It's called SEVEN SONGS because two of the songs didn't really survive 40 years of extreme heat/cold/rain/sun/shed....but there are OK recordings of those pieces on later tapes, so they do turn up eventually.

And you can also hear the songs, plus some of the interview content as introductions to some tracks, on my YouTube channel, where all the SEVEN SONGS have pages like this one, with lyrics, chord changes and accompanying album art: James Griffin YouTube Channel


I hope you can join me on this journey. I'm really looking forward to it. We'll keep the releases coming and work our way through all the recordings from the shed. There's lots to talk about, from then and now, and please consider subscribing to this journal via email and to the YouTube channel if you do feel you'd like to hear more. And if you feel like sharing the Lost Songs Journal and the YouTube channel, that would be great.